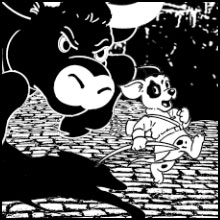 A male Dalmatian puppy with hundreds of black spots. Fluke is much larger and stronger than the average puppy. He loves his food and is always on the lookout for his next snack; Accident prone, generally gets into trouble, but quite lucky and normally manages to ‘Fluke’ his way out. He’s also very laid back.

Distinguishing features – Too many spots to count (Fluke won’t stand still long enough to try), but he does have a very distinctive black ear.

Nicknames – Spot or Spotty (not very original I know, but some people just lack imagination!)

Likes – Eating (especially cheddar cheese) and generally any food left lying around; loves a nice strong bowl of Tea and has recently discovered he loves to travel.

Dislikes – Heights; Cows; and most especially Bulls – They always seem to chase him.

Hobbies – Playing practical jokes (especially on Tash); walking up the woods; sleeping after a long walk.

Bad habits – Tells jokes that that nobody laughs at except himself 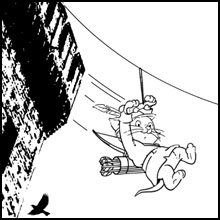 A female tortoise shell cat. Looks small and timid but can be very assertive when needed. She’s very intelligent and quick thinking, and has had to be on several occasions whilst on her adventures.

Nicknames – Bossy (but only by Fluke and when her backs turned)

Likes – Tuna, chicken, and fresh milk; big piles of leaves to play in.

Dislikes – Steep stairs; People sitting in her space on the sofa

Bad habits – Snoring! Tash denies this and refuses to believe it, but we have it in on good authority from Fluke that her snoring is as bad as Dad’s.

Not much is known about the ‘magic case’ – except, well, it’s err… magic!! As far as we know, it’s the only one in existence. Nobody knows where it came from (it was found in the back of the wardrobe, sadly discarded behind old, never to be worn again, clothes) and nobody really knows how it got its special magical powers.

Distinguishing features – Old, battered and held together with tape, bits of string and covered in holiday stickers (you know the ones we mean – labels such as ‘I love Weymouth’ and ‘Blackpool rocks’

A secret race of very small people that live underground. They’ve built miles of secret tunnels and use tree stumps with small hidden doors as entrances into their home. Nobody knows how far back in history they go, but there have been sightings of the Nummers going back many centuries.

Distinguishing features – Slightly green in colour, very small in size with a trunk like nose, which can be used as a snorkel when they are in the undergrowth, foraging under piles of leaves and twigs.

She is hardworking and does all the housework, cooking and generally cleaning up any mess and rubbish that Fluke, Tash and Dad create (which can be quite a lot!); also watches a lot of television soaps when she has spare time.

Works hard, (so he tells everybody!) and his main responsibility is to take Fluke for walks up the woods. Tries to keep the garden tidy, which is hard when you have a dog and cat continually playing games in the back garden. Reads books and snores (a lot!!)